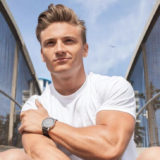 Chris Boudreaux was born in Burbank, CA. A standout college football player, he played at Nevada Wolfpack and then was picked up by the San Francisco 49ers. After he got released from the NFL he knew it was time to go back to his roots of theatre and film.

Having grown up in the theatre and always being the goofy guy in plays, he channeled all his time and work ethic into his craft. He’s a student at Playhouse West under Kathleen Randazzo and a booking class called The Lyndon Technique.

Chris has booked many short film projects, including Dangerous Games that was at Cannes 2017 Film Festival. Also has a few Co-Star’s on Escape the Night, Small Shots, and Then What Happened, plus a recurring role in the pilot The Filth.

He would like to thank his teachers Chris Liebe, Kathleen Randazzo, and Amy Lyndon for the great knowledge they’ve passed down to him and will continue to give him. Also, he’d like to thank his wonderful girlfriend Shannyn Lattuca for the love and support she gives him everyday.