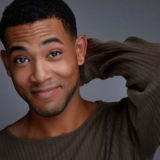 Isaiah Lucas is an American actor, dancer, model, and community activist from Las Vegas, NV.  He is the middle sibling of three children of a Firefighter father and a school teacher mother. He went to high school at Las Vegas academy, where he auditioned and got accepted as a theater major.

After graduating from high school, he took the leap of faith by move to Los Angeles at 18 years old to pursue his career as an actor.  Not too long after, Isaiah was  approached by commercial agent Daniel Hoff, who later signs him to his agency at Daniel Hoff Agency. Over the next couple of years Isaiah trained in the arts and found mentorship through the legendary Debbie Allen. He has since gained both national and international exposure by being featured in multiple commercials print ads, tv, and film projects worldwide including: Seventeen Magazine, Paul Frank, Pepsi, Mentos, Playstation, Red Bull, IBM, Nintendo, JBL, Apple, Microsoft, Nickelodeon’s Victorious, Dance Baby Dance, Our Father, and ABC’s Grey’s Anatomy. Isaiah is honored to work with the cast and crew of Steam Room Stories: The Movie.  “Set was so much fun! Every day was like walking into my dream job.  I can’t wait to bring that laughter and joy to the audience. Splash!”

During his free time Isaiah enjoys traveling, choreographing , working out, making money, mentoring the youth, and hanging with the bros. With the love for his craft and compassion for people, Isaiah will continue to relate to people, set new standards, and break social stereotypes, both on screen and within his communities.